Credit: Save the Children / Hanna Adcock

Achieving gender equality in education participation, in the teaching and learning process and in access to socialand economic opportunities that education can facilitate are key interlinked ambitions in two of the SustainableDevelopment Goals (SDGs) in the 2030 Agenda for Sustainable Development: SDG 4 on education and SDG 5 ongender equality. These aims are also key to the Education 2030 Framework for Action, which calls on countriesto adopt strategies that not only cover access to education for all but also address substantive gender equalityissues: ‘supporting gender-sensitive policies, planning and learning environments; mainstreaming gender issues inteacher training and curricula; and eliminating gender-based discrimination and violence in schools’.

The 2019 Gender Report is based on a monitoring framework first introduced in the 2016 Global EducationMonitoring Report. In addition to focusing on gender parity in education participation, attainment and learningachievement, the framework examines broad social and economic contexts (gender norms and institutions) andkey education system characteristics (laws and policies, teaching and learning practices, learning environments,and resources). The framework also looks at the relationship between education and selected social andeconomic outcomes. For instance, a move towards parity in education attainment may increase women’s labourforce participation rates, but low levels of labour force participation feed into existing norms and may constrainexpansion of education opportunities for women (Figure 1). 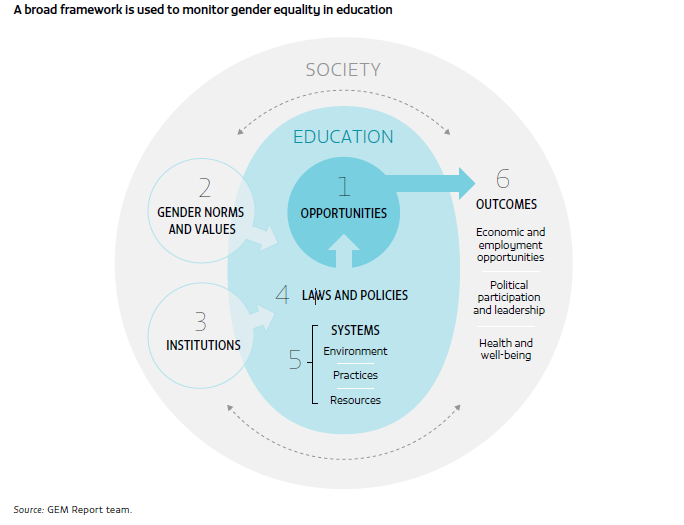 BOX 1: Intersections between education, migration and displacement are not gender-neutral

Being on the move, whether as a migrant or a forcibly displaced person, has gender-specific implications for education responses and outcomes alike. In a few cases, movement creates opportunities to break free from social moulds, but generally it exacerbates gender-based vulnerability. Moreover, the education and skills women have or gain can affect their ability to exercise agency or mitigate vulnerability in migration and displacement contexts. Thus a gender lens should be used in education analyses(North, 2019).

An analysis of internal migration patterns in 58 countries between1970 and 2011 showed that the share of women did not change much over the decades (Abel and Muttarak, 2017). Exceptions included China, where the gender ratio, formerly skewed towards males, equalized among younger migrant workers (Chiang et al.,2015). Between 1990 and 2017, the share of females in the total international migrant population remained stable at 50%. Looking beyond averages, some countries are major hubs of gender specific emigration, such as the Philippines for women and Nepal for men (UNDESA, 2017).

However, although the share of women who migrate has not changed radically, the share of women who migrate independentlyor for work, rather than as accompanying family members, has increased. This phenomenon has been termed the feminization of migration. Research shows how demand for and supply of migrant women’s labour are affected by unequal gender norms in the labour market (Hochschild, 2000; Yeates, 2012).

Among displaced populations, women and girls again account for roughly half of the total (Liebig and Tronstad, 2018). Their condition is particularly vulnerable because of the lack of privacy, protection and security in conflict contexts (ILO, 2017b; O’Neil et al., 2016).Two compacts endorsed in December 2018 recognized the importance of education for migrants and displaced persons. The Global Compact on Safe, Regular and Orderly Migration, endorsed by 152 of the 193 United Nations Member States, outlines a range of non-binding commitments on education in areas including access, content and the need for gender-responsive interventions in non-formal and vocational education (United Nations, 2018a). The Global Compact for Refugees, which espouses the principle of refugee inclusion in national education systems, makes explicit references to the need for flexible programmes for girls (United Nations, 2018b).