By 2030, ensure that all girls and boys complete free, equitable and quality primary and secondary education leading to relevant and effective learning outcomes

CREDIT: Save the Children. Teacher and schoolchildren outside of their school centre in Honduras.

Children born between 2010 and 2014 may be considered the SDG generation. The oldest reached age 5 in 2015 and, in many countries, were expected to be in pre-primary education in 2015/16 — the start of the SDG period (2015–2030). The youngest will turn 16 in 2030, potentially the latest age for timely lower secondary completion. For the SDG generation to achieve universal secondary completion by 2030, the current cohort needs to enter primary school on time. The global adjusted net intake rate into the first primary grade was 86% in 2017.

The Progress in International Reading Literacy Study, a survey assessing grade 4 students every five years, provides the main new cross-national survey data for the global indicator on learning outcomes. In the Islamic Republic of Iran, the percentage meeting the low benchmark increased from 56% in 2001 to 65% in 2016, i.e. by less than one percentage point per year. Some countries, including Morocco and Oman, improved at a rate bringing them within reach of the target by 2030; in others, e.g. Azerbaijan, Saudi Arabia and South Africa, the share of students achieving minimum proficiency did not increase, implying it will be very hard to meet the target.

A NEW COMPLETION RATE ESTIMATE FOR THE EDUCATION 2030 AGENDA

According to 2013–2017 household survey data, completion rates were 85% for primary, 73% for lower secondary and 49% for upper secondary education. However, there is a time lag for household survey and census data, and multiple sources may provide conflicting information.

Following the example of the health monitoring community, the GEM Report team developed a model to estimate completion rates. Projecting older cohorts’ completion rates backwards can provide a long-term view of the rates’ expansion path in a country. The current level of the indicator can be estimated with a short-term extrapolation from the most recent data. The approach reconciles overall patterns and trends across all data sources rather than taking the latest available estimate at face value.

Figure 7: Sub-Saharan Africa has a growing share of the global out-of-school population 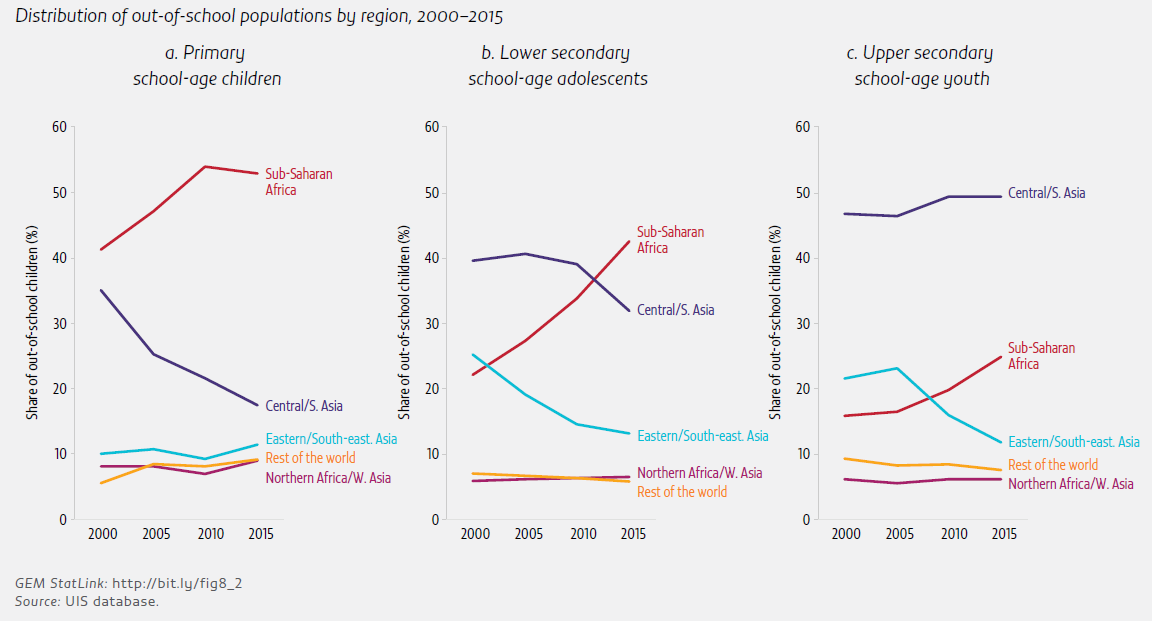