By 2030, ensure that all youth and a substantial proportion of adults, both men and women, achieve literacy and numeracy

The world literacy rate reached 86% in 2017, although it remains as low as 65% in sub-Saharan Africa. Progress in youth literacy — and shrinkage of the youth cohort — has been rapid enough in recent years to lead to an absolute decline in the overall number of illiterate youth aged 15 to 24, largely driven by Asia. But the number of illiterate elderly, aged 65 and above, continues to grow; there are now almost 40% more illiterate elderly than illiterate youth (Figure 12).

Figure 12: There are almost 40% more illiterate elderly than illiterate youth 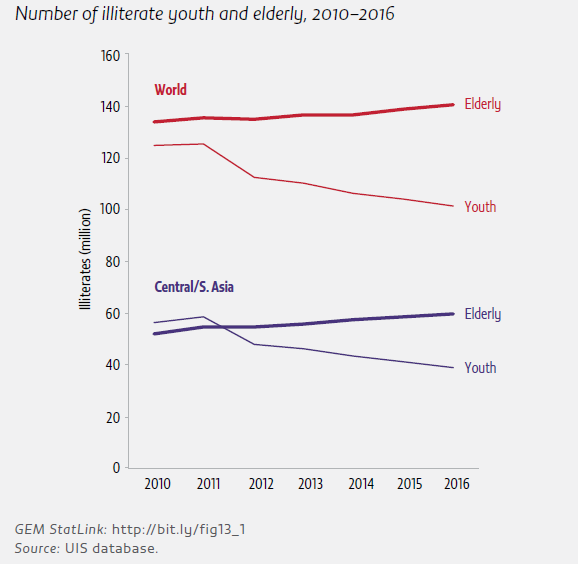 Isolated illiterate individuals, who live in households where no member can read, tend to have worse labour market and quality of life outcomes than proximate illiterates, who live with one or more literate household members.

Accordingly, literacy interventions should be targeted at old adults living in one- or two-person households in richer countries and at socio-economically marginalized young adults, often living in rural areas, in poorer countries.