By 2030, ensure equal access for all women and men to affordable and quality technical, vocational and tertiary education, including university

CREDIT: Antoine Tardy/UNHCR. Ala (centre), 22, fled Daraa, the Syrian Arab Republic, in March 2013 with her family. They settled in Zaatari camp, Jordan.

The global indicator on adult education participation has been refined to capture all formal and non-formal education opportunities, whether or not work-related. The diversity and number of providers make labour force surveys preferable to administrative data as a source, yet questions in these surveys vary considerably among countries, and few questions are compatible with the updated indicator definition. Standardizing questions to expand the number of countries with comparable data will not be easy.

The EU Labour Force Survey focuses on formal education and training in the previous 4 weeks (vs the indicator’s 12 months). Participation rates remain stable, on average, at 11%, although trends vary by country (Figure 9). Integrated Labour Market Surveys in Egypt, Jordan and Tunisia are limited to employed people, lifetime participation and work-related TVET. They suggest annual training participation rates of up to 4% among employees with technical skills.

Figure 9: Participation in adult education in Europe has remained stable, but trends vary by country 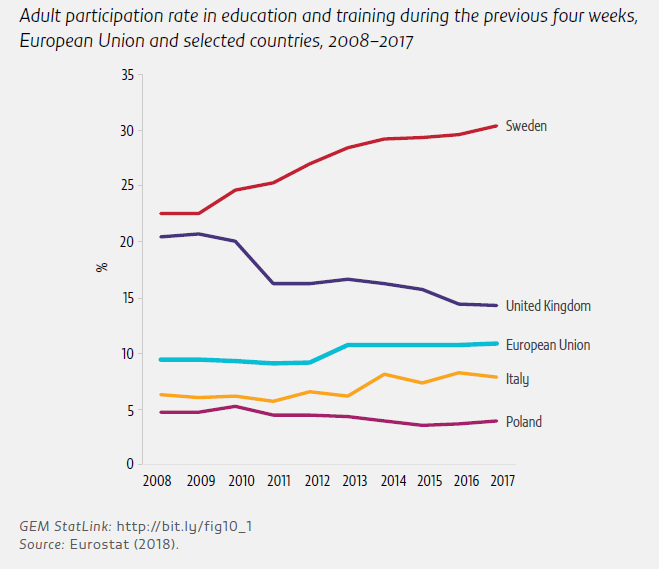 The tertiary gross enrolment ratio reached 38% in 2017, but the share of private expenditure in the total cost of higher education is increasing. Financial assistance in the form of student loans, grants, subsidies and scholarships means tertiary education is generally most affordable in Europe and least affordable in sub-Saharan Africa, where its cost exceeds 60% of average national income in most countries and reaches almost 300% in Guinea and Uganda.

Most education systems aim at targeted financial support, but the effectiveness of targeting varies substantially. World Bank data show that, in several low and middle income countries, households in the poorest quintile were less likely to receive a government scholarship than those in the richest quintile. Comprehensive policy packages including various approaches, as in Colombia and Viet Nam, may be more successful than scholarships alone.