Build and upgrade education facilities that are child, disability and gender sensitive and provide safe, non-violent, inclusive and effective learning environments for all

CREDIT: Edouard Dropsy/HRW. A fighter from the Central African Republic Patriotic Movement, a Seleka group, who are based next to two schools.

Figure 14: Fewer than 7 out of 10 schools have drinking water at a basic service level 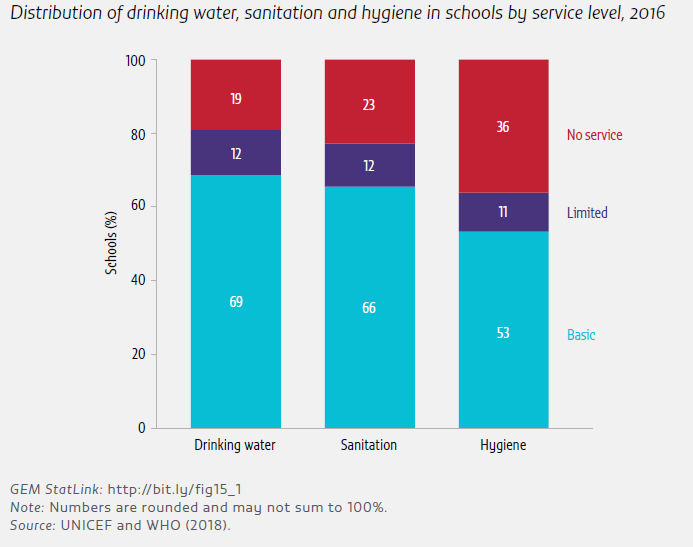 Few aspects of safety and inclusion in learning environments are fully monitored globally. Concepts such as bullying lack standard global definitions, and surveys vary widely. One study estimated that almost 40% of boys and 35% of girls aged 11 to 15 reported being victims of bullying. The number of countries legally banning corporal punishment in schools has increased to 131, up from 122 at the end of 2014.

Between 2013 and 2017, there were over 12,700 attacks on education, harming over 21,000 students and educators, according to the Global Coalition to Protect Education from Attack. Reported incidents included physical attacks or threats of attacks on schools, students and education personnel; military use of education buildings; child recruitment or sexual violence at or in transit to school or university by armed parties; and attacks on higher education. Twenty-eight countries suffered at least 20 attacks; Nigeria, the Philippines and Yemen were among countries suffering more than 1,000.

The coalition’s data do not capture certain attacks, including those by criminal gangs and school shootings by lone gunmen. In the United States, at least 187,000 students in 193 schools have experienced a shooting at school since 1999.