Designing and scaling up a good programme on gender equality in education is a shared responsibility. Donors need to carry out due diligence and collect relevant information to prove interventions’ sustainability. Governments need to be receptive to good ideas that are rooted in national education realities, and take all measures necessary to adopt and roll them out. The first step is to incorporate the ideas in national education plans, as one sign of a commitment to applying a gender lens in the education policy and planning cycle (UNESCO, 2018a).

The GEM Report team sought to determine whether governments consider donor intervention effectiveness in relation to gender equality in education and, if so, whether they take note of the most successful interventions to include them in their education sector plans. Education sector plans should express how governments mean to tackle key challenges to achieve key objectives. While plans are not expected to list detailed actions, they should indicate what programmes will be the main vehicles for achieving their objectives and how much the programmes will cost. If gender-unequal norms, institutions, policies, environments and resource allocation rules form a major constraint for achievement of national education objectives, then a plan should make clear how these bottlenecks are to be addressed.

The countries are situated in five loose and somewhat contiguous geographical groups: Sahel, littoral western Africa, central Africa, in and around the Horn of Africa, and southern Asia (Figure 16). They were selected based on their gender parity index of the gross enrolment ratios in primary, lower secondary and upper secondary education, cross-checked with evidence on gender parity in completion rates. Inevitably, the inclusion of some countries over others has been marginal, as data are patchy in some cases. And countries with low disparity in enrolment may still be characterized by highly unequal gender norms and exclusionary practices in education. 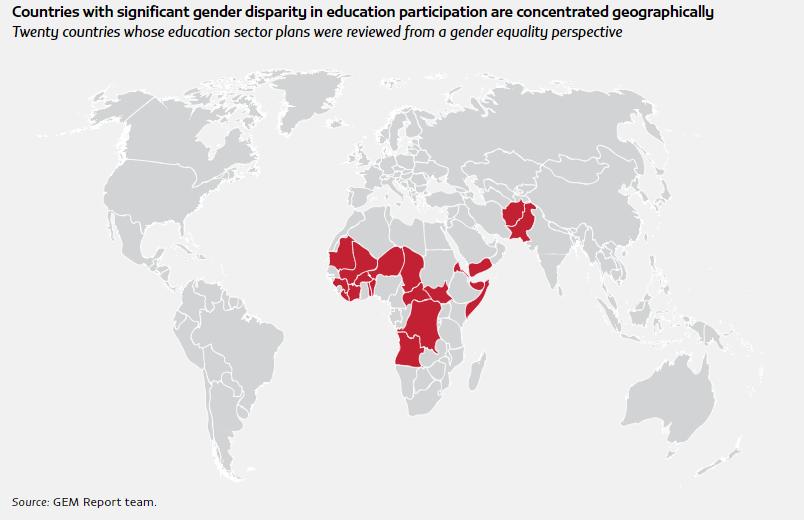 The Global Partnership for Education (GPE) and United Nations Girls’ Education Initiative have published guidelines for education planners which include criteria on what constitutes a gender-responsive education sector plan (GPE and UNGEI, 2017). The guidelines include a checklist of 19 questions in 7 areas, focusing on whether the plan is (1) informed by gender analysis, (2) transacted through a participatory and gender-sensitive stakeholder consultation process, (3) reflective of gender strategies and lessons learned and with gender integrated throughout, (4) backed by adequate financial resources, (5) reflected in the operational plan, (6) backed by necessary institutional capacity and (7) strengthened through gender-sensitive monitoring and evaluation.

To the extent possible, this review has attempted to cover these questions, albeit from a macro-level perspective in some cases. It was not possible to assess accurately whether a participatory and gender-sensitive consultation process had been followed, even where the documents provided some information. For instance, Liberia and Togo mention involvement of ministries dealing with gender as well as representatives of women’s groups. Somalia provides the percentage of female participants in the consultation process. But involvement by these stakeholders is no guarantee that their voices were heard and considered. Chad, meanwhile, had an inclusive process, but it is not clear whether it was also gender-sensitive. Other countries, such as South Sudan, did not mention details of a gender-sensitive process in their plans but that does not mean no consultation occurred. To assess the situation more fully, it would have been necessary to contact all participants, which would have been prohibitive not only for cost reasons but also in practical terms, given the long stretch of time over which the plans were drafted, with some dating from 2010.

Assessing whether an education sector plan is backed by adequate financial resources on gender equality is also a challenge. The budget of Mali’s plan, for example, is not detailed enough to enable assessment. In Guinea, activities promoting gender equality are budgeted, but not enough information is available to assess whether the budget is adequate. Such analysis would require information not just on the absolute amounts budgeted but also on unit costs, to assess whether they are realistic and sustainable, and, especially, on actual spending and its distribution. The operational plans were not always included in the education sector plans or annexes. In those cases, the programme plans or result frameworks were checked to ascertain whether activities related to gender equality were included.

Last but not least, the extent to which an education sector plan anticipates and considers interventions related to those initiated by donors does not necessarily demonstrate that national governments have taken ownership of these ideas. A few plans were clearly drafted with external support, raising questions about national ownership.

If education sector plans are to be gender-responsive in practice and not just on paper, they should reflect effective, donor-supported, gender equality-focused programmes and projects. The GEM Report team reviewed whether the plans incorporated actions responding to the 12 priority areas for gender equality in education reviewed in the previous section.

Among those priority areas, cash and in-kind transfers were the most likely to be included: They featured in three-quarters of the plans, although the breadth of coverage and depth of support were hard to assess. For instance, the Chad Intermediary Education Sector Plan 2018–2020 proposes scholarships, transport subsidies and provision of kits, clothes and toilet bags for girls. The South Sudan Education Sector Plan 2017–2022 mentions capitation grants to schools and cash transfers to girls enrolled in upper primary and secondary education.
By contrast, some priority areas are neglected, notably curriculum and textbook reform, girls’ participation in STEM courses and safe access to schools, which were mentioned by about one-fifth of countries. The Democratic Republic of the Congo referred to elimination of gender stereotypes from school programmes and manuals; Benin touched on gender balance in subject choice; community-level interventions in Afghanistan are intended to contribute to safety.
The quality of these examples is not easily comparable and simple references to topics do not translate into a clearly defined roadmap for action. However, on the basis of this analysis, some plans did stand out as being more thorough in their analyses and responses. The Niger Intermediary Education Sector Plan 2015–2016 was informed by gender analysis and reflected gender strategies, as well as having a related result framework. It included responses such as constructing single-sex toilets; orienting girls towards scientific or industrial branches for scholarships in secondary education, TVET and higher education; offering merit-based scholarships for girls from poor households and providing school allocations for vulnerable girls in secondary education, including both cash and in-kind transfers; and taking measures to sensitize communities on girls’ schooling, including modules on gender in teacher education and radio campaigns in areas with strong resistance from religious and traditional leaders.
The Guinea Education Sector Development Programme 2015–2017 is characterized by strengths in gender analysis, monitoring and evaluation. It prioritizes retention of girls in primary school in the regions where gender discrepancies are the greatest, while recognizing the need for measures at the secondary level and in TVET and higher education. Among the activities proposed are introducing a phone number in each educational district for reporting violence at school, setting up general and technical secondary schools of excellence for girls, and sustaining or expanding school canteens and providing free lunch boxes for girls.
The Somalia Education Sector Plan 2018–2020 envisages programmes including scholarships for girls using direct money transfers or cash grants to schools; gender-sensitive water and sanitation facilities; recruitment of female secondary school teachers in rural and underserved areas, using equity-based formulas and providing hardship allowances for teachers in high risk areas; and social awareness-raising activities through a girls’ ambassador programme, including role models and girls’ clubs, as well as annual community awareness-raising campaigns targeting community leaders and government officials.
At the opposite end of the spectrum, Angola, the Central African Republic, Djibouti and Mauritania made few references to concrete actions to promote gender equality in education. The Education Sector Transition Plan 2014–2017 of the Central African Republic does not propose any significant actions to improve girls’ education other than the possibility of removing school fees for all children at the primary level and the promotion of female pedagogical advisers in primary education. The Mauritania Education Sector Plan 2011–2020 proposes just three studies to analyse causes and corrective measures and three sensitization campaigns covering three zones.
Education sector plans need to ensure a clear vision and shared priorities for fighting gender inequality in countries where girls are at a disadvantage. Interventions that have a proven potential for scaling up should be recognized, embraced and supported for countrywide adoption. Plans should identify ways in which such interventions will be embedded in the government’s financing and administrative mechanisms. Their cost and monitoring implications should be taken into account.